Rivermark announced it has the first known Interactive Teller Machine (ITM) with simultaneous ATM deposit capable functionality up and running in the United States. This was a collaborative triumph between Rivermark, FTSI, NCR, and Fiserv who helped engineer the dual-functionality of the ITM. 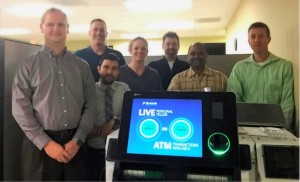 Previously, teller machines could only operate as an ATM (in dispense mode) and/or as an ITM (with a remote teller), but could not take a deposit in ATM mode. Thanks to Rivermark’s efforts, a single Self Serv 91 can now switch between ATM and ITM transactions continually, allowing Rivermark to increase their operating hours and capabilities.

Innovations like having the ability to run traditional teller transactions thorough an ITM have increased Rivermark’s member satisfaction and allowed their staff to take on enhanced sales and advisory roles. Pilot testing will continue over the next few weeks and Rivermark expects to put this ATM into service in Q1 of 2016.

Rivermark continues to set the standard for state of the art banking experiences and FTSI is a proud partner in that effort.